Spatial repellents can provide new technology for protection of humans from mosquito transmitted disease.  Glouck et al. (1967) defined spatial repellent as a repellent that is effective at a distance from the point of application.  Nolen et al. (2002) further defined a spatial repellent as an inhibiting compound, dispensed into the atmosphere of a three dimensional space, which inhibits the ability of mosquitoes to locate and track a target, such as humans or livestock. D.L. Kline (personal communication) observed  that linalool, when used alone, attracts mosquitoes to a trap; however, when used with CO2 or with CO2 + octenol, linalool reduces mosquito collection sizes by as much as 50%.  Kline et al. (2003) found that linalool manifests spatial repellency against Aedes aegypti in a dual port olfactometer study.

As early as 1911, linalool, C10H18O, was described in the British Pharmaceutical Codex as an unsaturated alcohol, isomeric with geraniol, that occurs in a large number of essential oils, such as oils of coriander, lignaloe, bergamot, spike lavender, and thyme. Linalool was initially registered as a pesticide with the U.S. E.P.A. in 1985 for the control of fleas on pets and pet bedding (Cornell Fact Sheet 77, 1985). However, despite the long and common use of linalool, research into biological activity of linalool has recently revealed such divergent activities as being a mate attractant pheromone component in the bee Colletes cunicularius (Borg-Karlson et al., 2003), producing antinociception in two experimental models of pain in mice (Peana et al., 2003), and exhibiting antileishmanial activity in an in vitro study of Leishmania amazonensis in mouse peritoneal macrophages (Rosa et al., 2003).

Candles are commonly used to dispense odors into the atmosphere. Candles containing oil of citronella are sold commercially in the United States and Canada, with some manufacturers claiming that these products “reduce the annoyance of biting insects,” specifically mosquitoes.  In a study of citronella candles using human test subjects, Lindsay et al. (1996) reported that the overall percent reduction in mosquito bites provided by the citronella candles was 42.3% and by plain candles was 23.1%.  Considering the reduction in mosquito biting activity produced by the act of burning candles, the addition of 3% citronella to candles further decreased biting activity by only 19.2%.

The purpose of this field study was to characterize the action of linalool candles as spatial repellents against natural populations of mosquitoes.

Park, Windsor, Connecticut USA (41.88° N, 72.67° W).  This park is located in the Connecticut River valley.   Four subjects (2 female, 2 male) were used in this study, which was conducted on 4 nights (August 12, 13, 14 & 15, 2003). An additional person timed landing rate counts.  Subjects wore clothing that permitted exposure of legs from knee to ankle.  Subjects had clean bare legs free of insect repellant, lotion, or other scent sources.

Landing rate counts were initiated by 1900 h each night. Subjects were assigned to one of the 4 test stations at the beginning of the evening and rotated through all 4 stations each night. Subjects sat on the back of the test station chair with feet on the seat of the chair. Subjects collected mosquitoes landing on their legs with a battery-operated hand aspirator for 10 minutes.  The collection vials were removed and sealed for mosquito identification. For the three subsequent trials each night, human test subjects moved to another test station.  After taking position at the new test station and inserting new collection vials in the aspirator, test subjects repeated the mosquito collections for 10 minutes.  Each test subject tested at each station each night.

All mosquitoes collected were identified to species using the keys of Darsie and Ward (1981) and Darsie (2002).  Weather information was obtained from the Bradley International Airport weather station located 1 km north of the study area (NOAA, 2003).

The data were subjected to analysis of variance (ANOVA) (Freund, 1984). The treatments were significantly different at a 90% confidence level (Table 2). Subjects received the fewest mosquito landings with Fragrance A candles and the greatest number of mosquito landings with OFF® Citronella candles (Table 3). 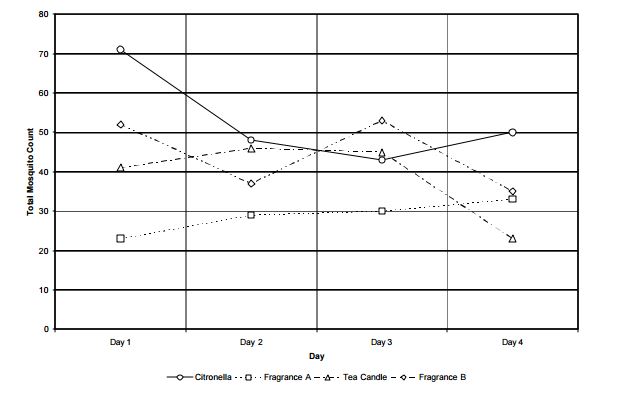